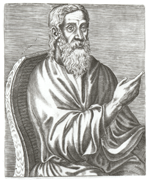 Little is known about the life of Titus Flavius Clemens.[1] He succeeded the converted stoic philosopher Pantaenus[2] as head of the Christian Catechetical school in Alexandria, founded by the latter in the middle of the second century. He is regarded as an inferior theologian to his immediate successor to the post, Origen.[3]

Clement drew extensively on Philo,[4] and followed both Philo and Justin Martyr[5] in claiming that the Greek philosophers had plagiarised their teaching from Moses.[6] His reasons for doing this were twofold. First, he wished to counter the negative attitude that many uneducated Christians had towards Greek philosophy. That (in his opinion) would have greatly hindered its spread in the Hellenistic world. Secondly, he was faced with the attacks of educated Pagans, such as Celsus (late second century), who in his work True Doctrine[7] argued for the superiority of Greek culture, of which Judaism and Christianity were but shabby counterfeits.[8] On the contrary, Clement argued, Plato and the other philosophers had read the writings of Moses and the Prophets: whatever good could be found in their works was a result of divine inspiration and/or their use of biblical material.[9] This theory is often referred to as "the theft of the Greeks". Lilla points out that Clement and Celsus shared the common conviction that the Greeks had inherited, not invented their superior culture and philosophy from the ancient civilisations of India, Persia, Babylon and Egypt.[10]

In extolling the divine character of the philosophy of Plato, Clement claims several times that Plato was dependent on Scripture,[11] as was Pythagoras (who is also warmly praised).[12] This is amply demonstrated in the reading list of the Catechetical school in Alexandria, which included the works of all the philosophers (except those of the Epicureans, who denied the existence of God), and was clearly modelled on the Platonic schools of the time.[13] He interpreted Greek philosophy in a biblical sense[14] and maintained that it had prepared the Hellenistic world for the ‘true philosophy’: the Christian gospel.[15] Philosophy gave Clement an the means by which he could penetrate beyond the literal sense of Scripture to reveal the true meaning, namely allegory.