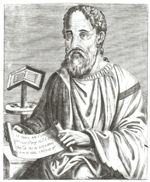 Eusebius studied under Pamphilius (c. 240-309). a Christian scholar and presbyter in the church at Caesarea. Pamphilius was an ardent disciple of Origen and Eusebius became deeply influenced by the Origenist tradition. His major work was his History of the Church, a massive piece of research that preserves quotations from many older writers that would otherwise have been lost. Despite the breadth of his reading most scholars agree that "his erudition is not matched by clarity of thought or attractiveness of presentation."[1] Perhaps urprisingly Eusebius did not follow the extremes of Origen’s allegorical interpretation.[2] Some writers note that just as Caesarea lay halfway between Antioch and Alexandria, so Eusebius’ hermeneutic lay midway between the traditions of those two cities.[3]