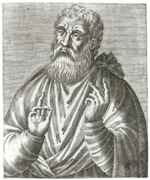 Justin came from a Greek-speaking non-Jewish family living in Flavia Neapolis (Shechem) in Samaria.[1] He wrote of how he searched for truth, attaching himself to a succession of philosophical schools: Stoicism, Aristotelianism, Pythagorianism and Platonism.[2] Finally (in about AD 130)[3] he met an old man while walking on the seashore at Ephesus who pointed out some of the weaknesses in his Platonic system. He showed Justin how the Old Testament predicted the coming of Christ; but it was seeing the courage of the Christian martyrs that finally convinced him.[4] Still wearing his philosopher’s cloak[5] he dedicated the rest of his life to defending orthodox Christianity against its philosophical opponents.[6]

During the reign of Antoninus Pius (AD 138-161) Justin ministered in Rome, founding a school that attracted a wide variety of students, including Tatian from Nisibis in Assyria, Irenaeus from Smyrna and Theophilus from near the Euphrates.[7] There he vigorously opposed the Cynic philosopher Crescens,[8] the Gnostic Valentinians, the Marcionites[9] and the Jews.[10] Justin earned his surname when he perished during the persecution of Christians by Marcus Aurelius (121-180) in about AD 165.[11]

Most scholars agree that Justin was verbose, confused, inconsistent and often not convincing in his arguments. Nevertheless, he is an important figure in the history of the Church. For him Christianity was "theoretically, the true philosophy,[12] and, practically, a new law of holy living and dying.[13] The former is chiefly the position of the Apologies, the latter that of the Dialogue."[14] In recent years the traditional view that Justin’s theology was dominated by his philosophical background has been questioned. As we shall see, his view of creation was very much influenced by Platonism. He used philosophy as a tool to spread orthodox Christianity, rather than translate Christianity into an academic philosophical system.[15]

Justin used allegory extensively in his writings, but it was the Palestinian allegory of the Rabbis rather than the Alexandrian allegory of Philo.[16] Given that Justin was born in Samaria this it is not really surprising. For Justin, the key to understanding the Old Testament was Christ and his Christocentric interpretation meant that the meaning of the original writers was considered unimportant.[17] There appears to be some dispute as to how much of his hermeneutic Justin derived from his study of the New Testament’s use of the Old Testament. W.H.C. Frend states that there "is no evidence that he was influenced by any of the writers of the NT."[18] William Shotwell, on the other hand, argues at length that Justin was heavily dependent on the New Testament writers.[19] However, Shotwell also states that the New Testament writers were not interested in the historical background of the Old Testament passages they used,[20] and the validity of such a statement is extremely doubtful. In balance I think that it is most likely that Justin formulated his method of interpretation from a variety of sources: the New Testament, his Christian predecessors, Palestinian Jewish exegesis, and Stoic allegory.[21]

[ 16] William A. Shotwell, The Biblical Exegesis of Justin Martyr. (London: SPCK, 1965), 40: "In Palestine it was symbolical and 3typological, but in Hellenistic Judaism it was generally philosophical and mystical."

[18] Shotwell, 42: "Although, in the Apologies and the Dialogue, Justin dues not use the word "allegory" to describe his method, he does use the allegorical method of interpretation. He interprets the Old Testament as saying one thing and yet meaning another. This is allegory as it is defined by the Greek themselves." See Pseudo-Heraclitus, Quaestiones Homericae, 6.