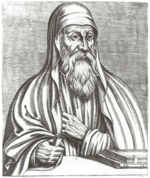 Origen assumed the leadership of Alexandria's Catechetical School at the age of only eighteen, after an outbreak of persecution under the Roman Emperor Septimius Severus (146-211) in 203 forced the previous incumbent, Clement, to flee. He was undoubtedly one of the most brilliant of the church fathers, yet sadly, due to his more infamous interpretations he has (perhaps unfairly)[1] been the object of much ridicule over the centuries. Origen was the most prolific of the Christian writers of his time and his six-column arrangement of the Hebrew Old Testament text (known as the Hexapla)[2] was not surpassed for over a thousand years.[3] Much time has been wasted in discussions of Origen, arguing over whether he was orthodox or not. Rather than repeat these I will leave them to one side and attempt to explain the reasons behind his interpretation of Scripture and the creation account in particular. As with all the early Church fathers we must learn to sift out "the wheat of real wisdom from the tares of unfounded speculation."

Origen reasoned in the 4th book of his treatise On First Principles that, if the Bible is inspired by God, then it cannot be irrelevant, unworthy of God, or simply crude. If it ever appears to be in error then we have obviously missed its deeper meaning.[4] Origen wrote that the "literalists" of his day that "they attack allegorical interpretation and want to teach that divine Scripture has nothing deeper than the text allows".[5] "Literalists," he complained, "believe such things about [God] as would not be believed of the most savage and unjust of men".[6] These 'Literalists' misunderstood the meaning of poetry, metaphors, parables and figures of speech and had no concept of the need to understand what the original author of the text was seeking to express to his audience.[7] It is therefore not surprising that they arrived at interpretations that Origen found offensive and caused him react against their definition of the 'literal meaning' [8] .He was prepared to tolerate these unintellectual believers, though he did find them an embarrassment when explaining Christianity to sophisticated pagans. Nonetheless, he believed that if they were genuine in their simplicity then the literal meaning of the Gospels was sufficient for salvation.[9] There was a second group of 'literalists' whom Origen was much less tolerant towards: the Judaisers. By means of a more sophisticated literalism this group attempted to continue obedience to the Law within the Christian Church.[10]

...contains three levels of meaning, corresponding to the threefold Pauline (and Platonic) division of a person into body, soul and spirit. The bodily level of Scripture, the bare letter, is normally helpful as it stands to meet the needs of the more simple. The psychic level, corresponding to the soul, is for making progress in perfection.… [The] spiritual interpretation deals with 'unspeakable mysteries' so as to make humanity a "partaker of all the doctrines of the Spirit's counsel".[11]

It has often been pointed out that Origen was not consistent in the distinction he made between the three levels of Scripture. In reality he only discussed two levels - those of the letter and the spirit.[12] Most modern theologians and Bible students seek to identify the meaning God intended a biblical text to have to its original audience. From this they derive its contemporary application, which (to be considered valid) must be linked to the text's original meaning.[13] For Origen the universal application - what the text teaches about Christ and how the reader can become like Him - was the original meaning of the text.[14] If a text did not appear to be speaking about how you might advance towards perfection then you had misunderstood it. This was the key that showed Origen that he had interpreted a text correctly. To put it simply: if he could make a passage speak in this way then he was confident that he had uncovered its true 'spiritual' meaning. Some passages yielded such an application easily; others required more spiritual insight and, sometimes, the rejection of the historical meaning. It was this 'insight' that the 'literalists' (those who saw only the 'letter') lacked.

There are several specific reasons that we can deduce from Origen's writings that led him to the conclusion that the straightforward historical meaning of many passages of Scripture were simply not true.[15] Most can be found in Book 4 of On First Principles.

In his second Homily on Exodus Origen finds a problem with Exodus 1:21 which reads in his Bible: "Because the midwives feared God, they made houses for themselves." This leads him to comment:

This statement makes no sense according to the letter. For what is the relationship that the text should say, "Because the midwives feared God, they made houses for themselves."? It is as if a house is built because God is feared. If this be taken as it stands written, not only does it appear to lack logic, but also to be inane. But if you should see how the Scriptures of the Old and New Testaments, teaching the fear of God, make the houses of the Church and fill the whole earth with houses of prayer, then what is written will appear to have been written rationally."[24]

Of course the solution becomes obvious when one translates the Greek word oikias correctly in this context as "families" instead of "houses". The verse then reads: "And because the midwives feared God, he gave them families of their own." (NIV).

Likewise in his Commentary on Romans(2.9) Origen rejects the Mosaic command of circumcision (Lev. 12:3):

There are, however, good medical reasons why circumcision was to be carried out on the eighth day that have only been recognised relatively recently with the discovery of blood clotting agents. In similar vein Origen argued "...what could be more irrational than (to take literally the injunction), "Salute no man by the way," which simple persons think the Saviour enjoined the apostles?"[29]

When the psalmist declares that God's truth 'reaches to the clouds', Origen feels constrained to insist that clouds cannot be intended literally in such a saying; they must be interpreted spiritually of those who are obedient to the word of God. The literal interpretation of Zech. 4:10 would imply that God had seven bodily eyes.[31]

When discussing Exodus 21:22-25 where Origen is at a loss to explain how an unborn child can lose an eye or have his/her teeth knocked out. How, he asks, can a pregnant woman be burnt while witnessing a fight between two men.[32] His over-literal understanding does not consider that it is the principle of just - but not excessive punishment - that is being established here.

Do you think these are the only words related to wells? Jacob also goes to a well and finds Rachel there. There Rachel becomes known to him as "good in her eyes and beautiful in appearance." [Cf. Gen. 29:17] But Moses finds Sephora, the daughter of Raguel, at a well. [Cf. Exod. 2:15]
Are you not yet moved to understand that these words are spoken spiritually? Or do you think that it always happens by chance that the patriarchs go to wells and obtain their marriages at waters? He who thinks this way is "a sensual man" and "does not perceive these things which are of the spirit of God." [Cf. 1 Cor. 2:14] But let him who wishes remain in these understandings, let him remain "a sensual man." I, following Paul the apostle, say that these things are "allegories" [cf. Gal. 4:24] and I say that the marriages of the saints are the union of the soul with the word of God: "For he who joins himself to the Lord is one spirit."[37]

None of the errors listed above were restricted to Origen. Many other ancient, and indeed some modern writers have made the same mistakes. Despite his reservations regarding the historical meaning of a text, Origen was at times prepared even to defend the literal meaning, such as that of Noah's Ark[41] and the Flood.[42] However, he usually fails to connect the spiritual interpretation to the straightforward historical sense.[43] For him it was "almost accidental that the Bible contained much true history. The soul within the body of Scripture was the important thing."[44] The motivation behind Origen's exegesis was the desire that his audience see and hear Christ in the Scriptures and be transformed through that experience.[45] We might quibble with his methodology, but surely not with his intention. It is also worth noting that Origen believed that the passages of Scripture that are historically true far outnumbered those which have a purely spiritual meaning.[46]

[1] Moisés Silva, Has The Church Misread The Bible? Foundations of Contemporary Interpretation, Vol. 1. (Leicester: Apollos, 1987), 49. Silva attempts to redress the injustice done to Origen by explaining the reasoning behind his hermeneutic.

[19] The Gnostics, of course, rejected anything connected with the physical world. Bethune-Baker, 71.

[21] Eusebius, History, 3.39.12-13 (NPNF, 2nd Series, Vol. 1, 172): "[Papias taught ] ...that there will be a period of some thousand years after the resurrection of the dead, and that the kingdom of Christ will be set up in material form on this very earth. I suppose he got these ideas through a misunderstanding of the apostolic accounts, not perceiving that the things said by them were spoken mystically in figures. For he appears to have been of very limited understanding, as one can see from his discourses. But it was due to him that so many of the Church Fathers after him adopted a like opinion, urging in their own support the antiquity of the man; as for instance Irenaeus and any one else that may have proclaimed similar views."

[28] R. Laird Harris, "Leviticus," F.E. Gaebelein, gen.ed., Expositor's Bible Commentary, Vol. 2. (Grand Rapids: Zondervan, 1990), 573-574: "There may be more reasons than one for such a law. First, it would put the mother in sufficient isolation to assist in bringing her back to normal health. Being unclean she could not do the cooking or keep the house. Also, it is possible that such a provision would help to prevent the spread of childbed fever, which in former days took so many lives. If the mother was unclean, presumably any midwife would have to wash in water and be unclean until the evening, which would help prevent the direct transmission of the disease."

[34] Origen, Homily on Joshua 9.8 & Principles 4.1.12; (ANF, Vol. 4, 360-361). Gordon D. Fee, "The First Epistle to the Corinthians," New International Commentary on the New Testament. (Grand Rapids: Eerdmans, 1989), 407, n.59: "To call this allegory is to push the term beyond its recognised boundaries. The OT text was chosen because in its original setting it meant precisely what Paul is arguing for here, the "worker" should reap material benefit from his labor. The meaning of the text is not allegorised; rather, it is given a new application."

[36] Origen, Homily on Joshua 9.8. Paul is using the Hagar-Sarah not as part of his Scriptural argument for the superiority of the New Covenant, but rather is part of his exhortation to "become like me" (Gal. 4:12f.). Richard N. Longenecker, "Galatians," Word Biblical Commentary, Vol. 41 (Waco: Word, 1990), 199. It therefore wrong to claim that Paul based doctrine upon allegorical interpretation.

[38] Elsewhere Origen explains the account of Lot and his daughters defending the literal sense. See Origen, Homily on Genesis 5.1-5 (Heine, 112-117).