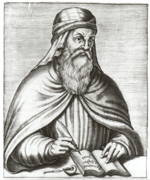 Gregory, a friend of both Basil of Caesarea and Gregory of Nyssa, was the son of a wealthy bishop (also called Gregory).[1] Like Basil he was well-educated and deeply influenced by the teachings of Origen.[2] In this regard Gregory stood halfway between the literalism of Basil and the allegory of Gregory of Nyssa. Again, like hus f riend Basil, Gregory was an ascetic at heart. After many years of periodic withdrawal into monasteries he was made bishop, a position that he did not take up willingly.[3] Many of Gregory's works have survived, including his Five Theological Orations which have a distinct Trinitarian emphasis.[4]

[2] Rosemary R. Ruether, Gregory of Nazianzus, Rhetor and Philosopher. (Oxford: Clarendon Press, 1969), 26-27: "...Gregory seems ignorant of Neoplatonic writings, of Plotinus in particular. If we conclude that he did not know Neoplatonic thinkers or writings directly, this helps to explain why Gregory, who inherited his Neoplatonism from Origen, can so readily assume these ideas to be Christian."

[3] Norris, "Gregory of Nazianzus," Everett Ferguson, editor, Encylopedia of Early Christianity. (New York: Garland, 1990), 398; Ruether, 32. Indeed he was forced into it by his father.