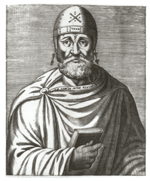 The writings of Philo are the most important surviving documents from the world of Hellenistic Judaism.[1] They furnish us with a great deal of first hand information concerning the religion of the Jews outside of Israel, New Testament background and the interaction of Judaism within a Gentile culture.[2] Philo was deeply influenced by Middle Platonism,[3] Aristotle, the Neo-Pythagoreans, the Cynics and the Stoics. He stood at the end of a long Jewish tradition whose thoughts he developed, as evidenced by his references to the works of his predecessors.[4] Like them he attempted to interpret the Old Testament Scriptures in such as way as to bridge the gap between Judaism and intellectual paganism[5] rather than attempting to produce his own philosophical system.[6]

Philo made extensive use of allegory in his writings, but it would be a mistake to assume that he was the first of the Alexandrian Jews to allegorise Scripture. In fact, he stood almost at the end of a long tradition of men who wrote as Jews for Gentile ears.[7] Previous writers, however, had not thought of their interpretations as allegorical,[8] but rather as 'proper' or 'fitting' in that they corresponded with what the interpreter understood as the nature and character of God.[9] Philo recognised several levels of interpretation that he regarded as 'literal', ranging from the literalistic to sophisticated.[10] He claimed to find in the text itself indications that it was not intended literally. For example, the Trees of Life and of the Knowledge of Good and Evil are seen as being intended symbolically because no such plant have ever existed on earth.[11] For Philo a "literal or better, a literalistic interpretation is to be rejected when it is either blasphemous or ridiculous. The kind of literal interpretation that was rejected by Philo is the kind of interpretation that was rejected by Jewish interpreters as far back as Aristobulus."[12] Philo was, on the other hand, the first writer who attempted to maintain the validity of both the literal and allegorical interpretations of Scripture,[13] because he considered both to be divinely inspired.[14]

Though they were not preserved by the Jews,[16] Philo's works were treasured by Christian writers[17] who seized upon his concept of the Logos, thinking that it was the same as the Logos of the prologue of John's Gospel.[18] To Philo the Logos was "the instrument by which God makes the world and the intermediary by which the human intelligence as it is purified ascends to God again"[19] .However, Philo's Logos is not Divine, nor is it a person and it has no existence apart from the role it performs.[20] Although it was once generally accepted among scholars that there was some dependence by John on Philo's concept of the Logos, it seems more likely that both were drawing on a common Jewish background, into which Philo imported Platonic concepts.[21] So important was Philo to the early church writers that some, such as Eusebius and Jerome even went so far as to claim that he was a Christian. Eusebius records a legendary meeting between Philo and Peter in Rome[22] and both writers argue that Philo's work concerning Jewish ascetics (On the Contemplative Life) is a first hand report of the church (and monasteries!) founded by Mark in Alexandria.[23] It is true to say that by the fourth century "Pious legend would allow no writer so influential on early Christian exegesis to remain unconverted."[24]

[5] "Philo," Encyclopedia Britannica Micropedia, 386: Philo was no plagiarist, for he adapted Plato's theories to his own ends. Frend, Rise, 36.

[6] Thomas H. Tobin, The Creation of Man: Philo And The History of Interpretation. The Catholic Biblical Quarterly Monograph Series 14. (Washington, DC: The Catholic Biblical Association of America, 1983), 2. "Philo," trans F.H. Colson & Rev. G.H. Whitaker, Loeb Classical Library, Vol. 1. (London: William Heinemann Ltd., 1929), xv-xvi: "His purpose was the same as Bunyan had in the Pilgrim's Progress and the Holy War, and Dante to some extent in his Divine Comedy namely, to set forth an allegory of the history of the human soul and its relations to God. But while Scripture to Bunyan and mediaeval eschatology for Dante were merely foundations on which they could rear the fabric which their own imagination created. Philo, entirely devoid of creative genius [when he attempts allegory of his own, as in De. Sac. 20-44 it is poor stuff], could never get away from the role of interpreter." Brackets were footnotes in original.

[9] Tobin, 42-43. Tobin, 43: "For example, in the interpretation of Gen. 1:26, an explanation of the verse must be given which shows that God is not in need of helpers in creating man, but that the use of such helpers is fitting and proper in order to prevent an improper attribution to God of responsibility for the creation of evil." i.e. evil is the fault of the helpers who created man's lower parts. See Philo, Creation, 72-75 (Yonge, 11); cf. Plato, Timaeus, 41.

[16] Henry Chadwick, Later Greek and Early Medieval Philosophy. (Cambridge: CUP, 1970), 156-157: "The Judaism which established itself as normative was that of the rabbis.… The points of affinity between Philo and later rabbinic traditions turn out to be even less numerous than might be expected, and if later Jewish writings mention him, which is not certain, it is on terms of bitter disapproval."

[21] Stephen Smalley, John ~ Evangelist & Interpreter. (Exeter: Paternoster Press, 1983, 1992 reprint), 58; D.A. Carson. The Gospel According To John. (Leicester: IVP, 1991) 115; Guthrie, D. New Testament Theology. (Leicester: IVP, 1981) 322-323. Bruce, History, 54: "Although Philo does not appear to have exercised direct influence on New Testament thought, his writings present a number of striking points of contact with the Pauline Epistles, and some knowledge of his thought and method provides positive help for the understanding of the Fourth Gospel (although the Johannine Logos doctrine is essentially different from the Philonic) and of the Epistle to the Hebrews - the work of another Alexandrian who, however, prefers the typology of salvation-history to Philonic allegory as the key top unlock the meaning of the Old Testament." See further Henry Chadwick, "St .Paul and Philo of Alexandria", Bulletin of the John Rylands Library, 48. (1965-66) 286ff.; Lane, William L. "Hebrews 1-8," Word Biblical Commentary, Vol. 47A. (Waco: Word, 1991), civ, cvii-cviii.